What is Seppuku? Part 2

The history of Seppuku

In the history, seppuku is also known as a peace treaty. The Lord of a clan who lost a battle performs seppuku to show that clan battles are ready to conclude peace and to comply with . 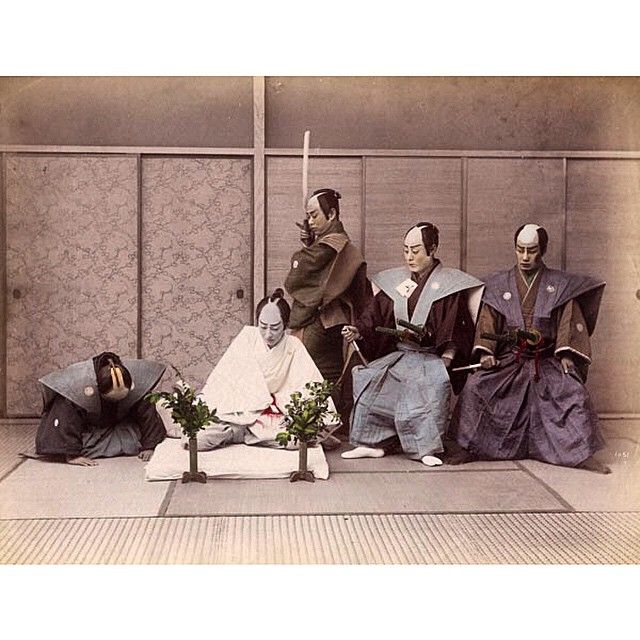 Let me describe the ritual in detail.

Firstly, Samurai purifies himself by bathing, dresses in a special white clothes and eat his favorite food. When he’s ready, he quietly sits down in front of the sword like the picture above, and write his death poem. This is an only thing the person is officially allowed to do to describe how he feels at the last moment of his life. This poem is called “Jisei-no-ku” in Japanese. Many of these are still passed down from generation to generation as the last words of historical people. Nearby samurai is the companion (kaishakunin) . Samurai opens the kimono (clothing) , take a short sword (wakizashi) or knife (tanto), and cut from right to left by moving the blade to the upper body in order to allow the guts to come out (gut). We have one proverb to say “Hara ga kuroi”, whose direct translation is “Your stomach is black”, which means you are guilty. One reason to let the guts out is, however, to claim that he’s brave and how clean his soul is. Especially when the person needed to perform seppuku even though he was not guilty, he shows how “white” his guts are by cutting out his belly.

In a moment kaishakunin beheads him. This is called Dakikubi – decapitations . For this task a masterful swordfighting specialist is chosen because decapitation needs to be carried out accurately and require a higher skill to get it done only in one time .

Seppuku as punishment was abolished in 1873 , but informally , this type of suicide is left . There are several known army commander who made this ritual in 1895 and during World War II .

In 1970, one of famous Japanese writers Yukio Mishima and one of his followers held a public seppuku in a place of the Japanese defense forces .